A fine day ends with a fine

Some stories are really hard to explain. This is some story. In one of the more unusual relationships we’ve encountered this week, Thirsty Dave fell in love with a butterfly. When we first heard about it, we thought they would have little in common but they both have an interest in brewing techniques of the 19th century, the butterfly spends most of her time outdoors and the thirsty one spends most of his time outside the door of the pub, waiting for it to open. After hearing so much about the blossoming romance, we decided to pay her a visit at the local butterfly farm and also take the opportunity to introduce Little Dill Y to one of the more colourful of insects. As soon as we got there Thirsty Dave gave her a kiss and faster than the sound of the speed of light, we were hit with a $500 fine. If only we had of noticed the notice: 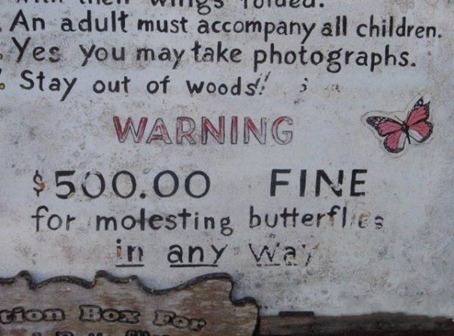