Wikipedia explains what a nun is:
A nun is a woman who has taken vows committing her to a spiritual life. She may be an ascetic who voluntarily chooses to leave mainstream society and live her life in prayer and contemplation in a monastery or convent. The term "nun" is applicable to Catholics – both eastern and western traditions – Orthodox Christians, Anglicans, Lutherans, Jains, Buddhists, and Taoists. While in common usage the terms nun and sister are often used interchangeably, in some cases they are differentiated, a nun being a religious female who lives a contemplative cloistered life of prayer and meditation, while a sister, in Christian denominations, lives an active vocation of prayer and service, often to the needy, sick, poor, and uneducated.
With that in mind, the following picture might explain why I suffer from sphenisciphobia -  fear of nuns: 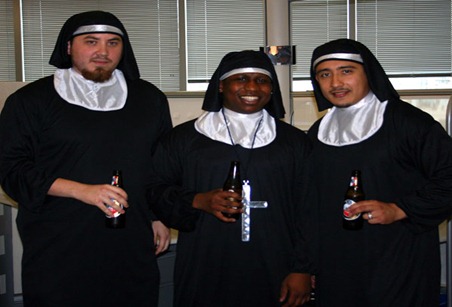