Fact of fiction? You decide

This one's for Jill Y. When I told her there was a book called 'The Policeman is your friend and other lies' by Ned Beaumont, she was convinced I was telling porkies. In all fairness, I have an overactive imagination and it kind of does sound like something I would make up. Having said that, if I made up the title of the book, I went the extra mile  to make up the name of the supposed author. If that wasn't enough, I went another extra mile and read her an editorial review of this so called fictional piece of fiction:

The sneering cops on the beat, the robotic federal agents, the condescending judges who dole out years of jail time for petty offenses, the narrow-minded teachers who do their best to snuff out creativity and resourcefulness - these are the liars and deceivers of American society who have fastened themselves to our necks like obscene vampires in search of an ongoing supply of free sustenance. They deserve to be exposed, ridiculed, and replaced - and Ned Beaumont has begun this process by providing this book.

At this stage she was slowly coming around to believing me so I thought it was time to produce my trump card. I picked up the laptop and there before her very eyes, was a picture of the book: 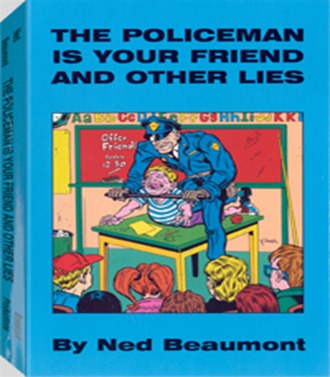 She quite rightly said that with the help of Photoshop, I could have easily made the picture up.

Your mission, should you choose to accept it, is to figure out (without Google!) if such a book exists.

Email ThisBlogThis!Share to TwitterShare to FacebookShare to Pinterest
Labels: Fact of fiction You decide, humour, Its good to mock, Jill Y, Mocking, Photoshop, The Policeman is your friend and other lies
Newer Post Older Post Home