Q. What’s the opposite of a Musician? A. A big haired, talentless, good for nothing, middle of the road, ear wrecking, excuse of an actor aka JBJ.

This world is such a surprising place. If you had asked us last week if we would ever praise Bon Jovi, we would of laughed until we stopped. The very thought of praising Bon Jovi, hurts like the last time you twisted a knife in your abdomen for a laugh. And so we arrive at a place we never thought we’d see. If there’s one thing Jill Y’s sister thought us, it’s ‘never play leapfrog with a unicorn’ but that has nothing to do with this story at all. If there’s one thing Jill Y’s sister’s 2nd best friend, thought us, it’s ‘always do what you are afraid to do’. We’re afraid to praise Bon Jovi’s  hair because it’s just not natural, just like his hair. Speaking of natural, the praising of Bon Jovi or indeed his hair, isn’t. Speaking of Bon Jovi’s hair in a complimentary fashion is naturally unnatural for us. I think you get what we’re tying to say but if for some unnatural reason, you don’t, please see below: 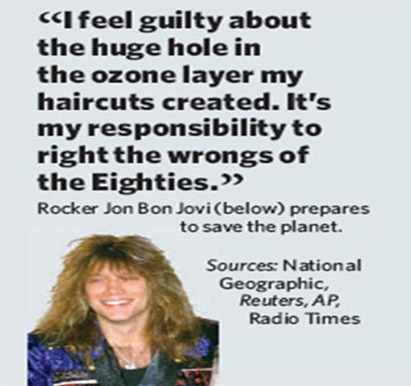 Email ThisBlogThis!Share to TwitterShare to FacebookShare to Pinterest
Labels: always do what you are afraid to do, humour, Its good to mock, Mocking, never play leapfrog with a unicorn, The very thought of praising Bon Jovi hurts
Newer Post Older Post Home