If you were to tell me I talk a lot of utter nonsense, I wouldn't argue with you. At It’s good to mock, despite our common sensibilities, we prefer nonsense to common sense.  We're a collective of Irish people who conform to every Irish stereotype. We're all called Murphy, have red hair, hang out with Bono, wear white wooly jumpers, fight in bars, sing songs to each other at the drop of a hat, pick up the hat and sing another song to each other over another drink. We're a friendly, welcoming nation of musicians and poets. If you're ever over in these parts, drop by and my Uncle Seany will introduce to to a Leprechaun at the bottom of a rainbow.

We also have a fascination for throwing benefit concerts for those who are not as fortunate as Bono, i.e. the rest of the world or the other 3 (sometimes forgotten – I can’t quite remember their names right now) member of U2. I can't guarantee that we'll have a world famous headline act but lets just say, we're hoping for a certain rock band fronted by Bono. I'm off now to kiss the blarney stone, watch Riverdance and play a round of golf with Paddy Harrington.

I leave you with these words:

In heaven there is no beer, that is why we drink it here.

and this picture of some Irish priests: 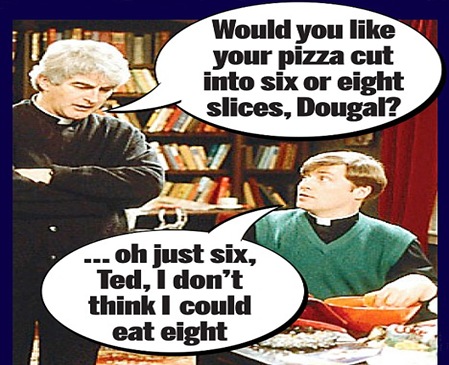