I've been accused of many, many things but never  of being 'ordinary' or 'average'. When I was a teenager, I used to think that if I dressed a little different to everybody else, I would be a little different to everybody else. As I got older, I realised that clothes have as much to do with individualism as acorns have to Brazilian pro-cyclical fiscal policy. Experience has thought me that I just need to be myself and individualism shines through. Sometimes it shines through so much, it scares the bejaysus out of me. If you like me, you're cool, if not, you're a fool. This is not open for discussion. If I wasn't myself, I would love to know me as I'm fairly fascinating in a freakishly funky way. Things people say or do rarely dent my confidence as I am self assured in my uniqueness. This picture however, made me lose several nights sleep: 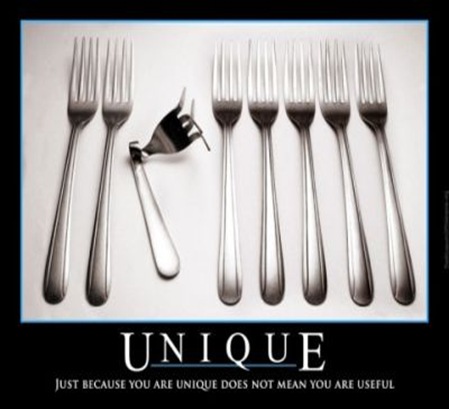 Email ThisBlogThis!Share to TwitterShare to FacebookShare to Pinterest
Labels: humour, I'm fairly fascinating in a freakishly funky way, I’m as unique as the fingerprints of a fingerprinted fingerprint, Its good to mock, Mocking
Newer Post Older Post Home