Our day out at the cinema

Jill Y, Sugartastic Daddy John, Thirsty Dave and I went to the cinema to see Inception the other day. While the majority of us enjoyed the film, Jill Y was particularly vocal in her condemnation of this modern classic. To quote her word for word:

"I  was amazed at the ineptitude of the story telling. Clearly Christopher Nolan has lost all artistic integrity. His scripts from Batman Begins onwards have lacked the poetic intensity and depth of a masterpiece like Memento."

Nobody in the collective wanted to be rude so we kept our opinions to ourselves. However later on at 11:56pm, I couldn't help but send her the following: 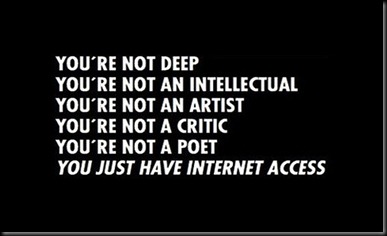 This expressed the feelings I could not show in public due to fear and a lawsuit pertaining to the 2010 support clause of our relationship agreement which states:

The male party in the aforementioned relationship shall not at any time between the hours of  12:00pm - 11:55pm through the medium of speech, image or interpretive dance, cause undue psychological or physical distress to the female party. Failure to comply with the above stipulation will incur a payment of watching Mama Mia every weekend for the next year.

Damn that relationship agreement. Can you imagine what it would be like to have to listen to Pierce Brosnan singing for a whole year.