I should probably begin by saying that I love Jill Y and wouldn't do a thing to hurt her. Having said that, I haven't been myself lately and she's starting to ask if everything is alright. I remember very little about the night in question. There was myself, Sugartastic Daddy John and Thirsty Dave. We were in Las Vegas and I won a large sum of money. Thirsty Dave handed me something and I drank it. Then the lights went out and when I woke up, it was 22 hours later. This all happened last May and Sugartastic and Thirsty Dave have refused to tell me what happened. I know Thirsty Dave was ordained as a Minister that night and Sugartastic legally became a woman before legally becoming a man again. They did tell me it was the night to beat all other nights and that I am a total legend but that's all they'll tell me. And then on Tuesday of this week, my life changed forever as the following picture was handed to me by a 7 foot tall black suited Zomba Recording Corporation employee with the accusing look of an accuser: 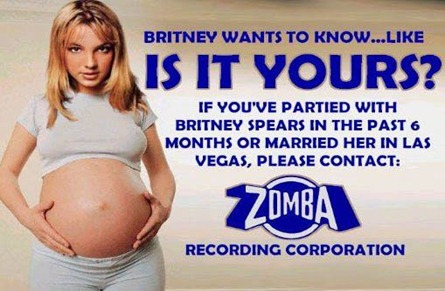